Hello friends! Today I am so very excited! It’s been two weeks (and some days) from the BSB concert at O2 Arena and still I cannot believe that I went to watch them live! It’s been such a dream from since I was a schoolgirl and now that happened, I still think it was only a dream! I am sure that all of you when you went to school in the good ol’ 90s, you must have heard at least one BSB song on the radio! And I am not even talking about crushes! Nick was my first crush (and I’m thinking I was not the only one!), but as I grew up I started appreciating Kevin more. It was the whole package, I believe. There is even an article on The Cut that kind of shares the same ideas as me on Kevin! But before I start gushing about Kevin, let’s get on the actual BSB concert!

I went there with a friend that we share the same love of the 90s. Both children of the 90s, we grew up in this decade and like Backstreet Boys, old rock, anything actually reminiscent of that period. We met outside of the Arena and made our way inside. First of all, I want to say thank you to the TFL people that had the station ready for us, what with all the signs reminding us of Backstreet Boys! Albeit a second concert in a row (the first one was on Monday, while we went for the Tuesday one), it was BSB craze over there and I loved it! The same thing happened with Enrique Iglesias back in October 2018, so I believe that they do the same thing for every artist coming to the O2 Arena and that’s fab!

After we got inside and found our seats, I can tell you we were full of anticipation! It was our first time at a Backstreet Boys concert and obviously we didn’t know what to expect! The opening act was Mic Lowry and they did a good job in getting the crowd going! I can tell you that by the time it was almost time for the main event, the arena was full of anticipation! And the boys made an entrance that was awesome. They didn’t disappoint at all! Before they started on the video wall behind the stage, the titles of all their albums were projected, from Backstreet Boys to DNA, which is their most recent one. It was official, DNA World Tour was starting!

We were treated to a fantastic show even from the beginning. The whole arena went dark, with only the stage lit up and the boys started singing “Everyone”, while the crowd went crazy! During the whole concert the visuals were fantastic and the boys were amazing! For those of you who haven’t watched Backstreet Boys live, I can tell you that Nick has aged extremely well, while they all keep dancing and singing like 26 years ago, when they formed the band. The fact that they started some 26 years ago, when Nick was just 12 and Brian was an 18 year-old Southern boy from Kentucky, was mentioned many times during the concert. It is fascinating to think that they started as a boy band and now they are all grown ups with their own families!

They included in their setlist some of their biggest hits during these 26 years, and as you can imagine, during “Everybody”, “As Long As You Love Me”, or “I Want It That Way” was when all of us started jumping up and down! The whole arena, which was 90% full, from what I gathered, got really into it. They also treated us to some funny tidbits from their career and even changed clothes on stage! Oh yes, Kevin and AJ were really on fire! And now that I mentioned AJ, I didn’t know that he is so crazily awesome! He would totally be my friend, if we knew each other that is.

In case you didn’t know, the concert ended on fire and with the one song dedicated to their fans, who were children in 1993 and now may be parents! That song is of course “Larger Than Life”! I’m sure that Brian, who wrote it, is still thankful to the fans who have embraced (and loved) Backstreet Boys since the start and this is a song that speaks of itself when it’s mentioned “Every time we’re down, you can make it right, and that makes you larger than life”! It was a notable end to a fantastic concert that was a nod to the 90s, if there was one!

I am very happy that we went to this concert, as we had an amazing time there! Campy and exuberant, I wholeheartedly recommend going to a Backstreet Boys concert, as you will get genuine music, feelings and nostalgia about this incredible decade, the 1990s. It was a celebration of everything we loved from that era and the fact that no matter how old you are, you can still have fun in music from your youth! 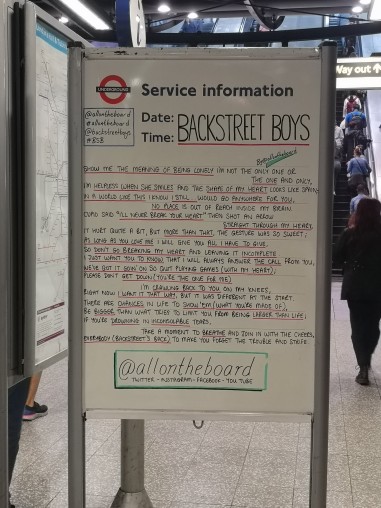 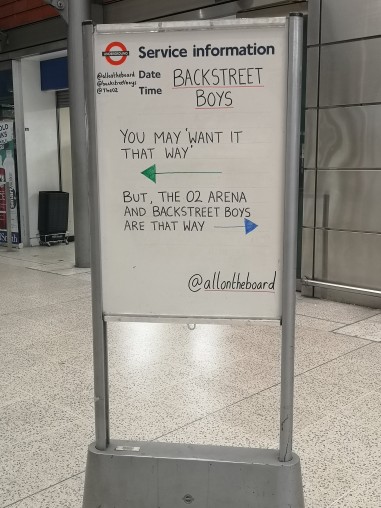