Hellooo everyone! How are you my lovelies? How are you doing? Have you finished your Christmas shopping yet? I can officially say I’m done this year! Secret Santa done, I’ve already ordered my brother’s gift, so I only have the wrapping to do (which I hate tbh….) Seriously, why can’t I wrap my presents properly each and every time? Why? Anyway what I love during this period just before Christmas is all the Christmas dinners, and getting together with people. Be it from work or outside of it, I just live for those pre-Christmas dinners, even if they appear tedious to some people I know.

At work this year we decided to go for something entirely different, so one of my colleagues, Maria, made a reservation for a Turkish restaurant at Golders Green Road. It was a nice change, as all the previous times we’d go for Indian cuisine. Don’t get me wrong, the restaurants from last year and the year before that were fab, but I think we wanted a little change and what better than Likya? As I said before, it is at Golders Green Road, so an overall 10 minutes on foot from our place of work. Not bad, huh? 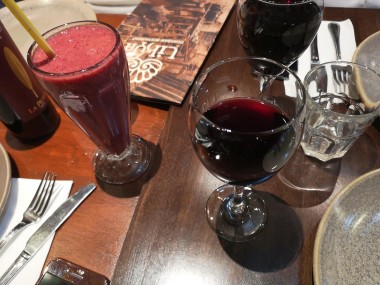 When we arrived, we could see all the kebabs that were getting ready, and I thought “Everything looks so delicious!”. We sat down, took off our coats and started talking. I was showing everyone I could the dress I bought for New Years Eve. It is a lovely navy dress that I fell in love with since the first time I looked at the Silkfred site. I can’t wait to wear it!

Anyway, after showing off, the starters arrived. It was mainly several dips with a lot of pita bread (and I mean a lot of it!). Tzatziki, baba ganoush, some fried aubergine (that was simply delicious…), and other dips as well. The platter was garnished with some olives, cut tomatoes and cucumber and also some pickled peppers. The wine was flowing (my colleagues picked a lovely Chianti) and we had such a good time. But it’s not only about the wine; some colleagues had smoothies that were fresh-pressed in front of my own eyes, which is impressive in my opinion. My lovely colleague Roxie was trying to take pictures of the wine with all the glasses around with her artistic eye (seriously that girl with Photoshop is unbelievable)! 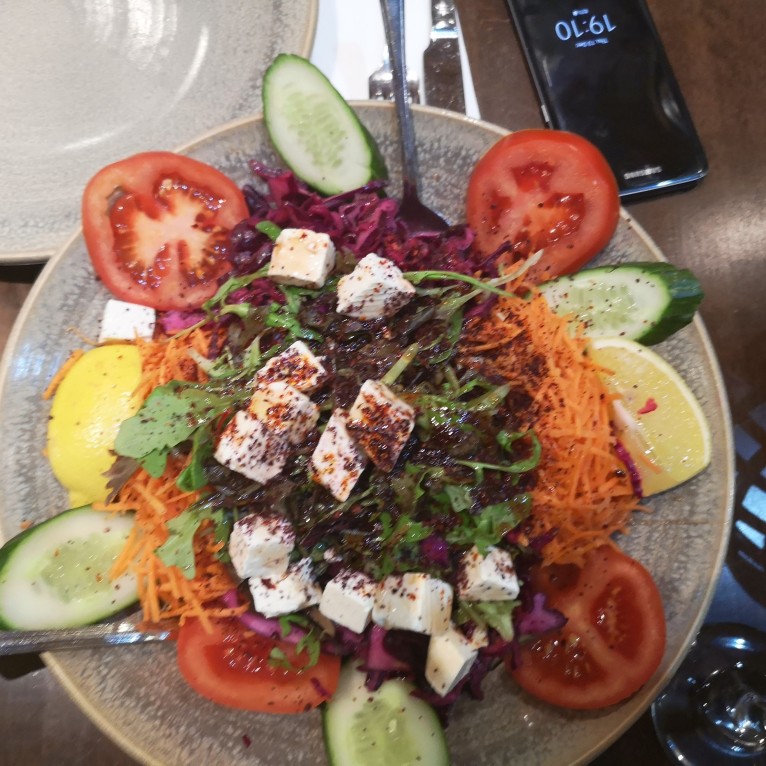 After stuffing ourselves crazy, it was time for the mains. While all the starters were for vegetarians as well, the main platter was for meat-eaters, however the restaurant offered the option of having a veg dish, such as falafel or stuffed peppers, as main. The meat platter came together with a huge salad bowl with a little bit of white cheese (or was it feta? I have no idea…). Overall it came pretty close to what I am accustomed to when I go out in Greece, so I was very much satisfied! All the meat was cooked to perfection, presented over a bed of rice and bulgur wheat and it was so succulent and tasty! The desserts were also delicious and the selection was quite varied. From stuffed pudding to my tiramisu to coconut ice-cream and the traditional baklava (and not balaclava Maria…), they were all just perfect! They even had bubblegum ice-cream, which was a funky baby blue colour, I just loved it instantly!

The overall atmosphere was cosy and warm, with a lot of wood and exposed brickwork, featuring a lot of images from Turkey. The servers were very professional and the red wine was simply decadent. It’s no wonder that we became slightly tipsy at the end of it… And yes, the slight hangover I was nursing the next day was all the more worth it! See that I used the same word twice? Yes, “slightly” describes accurately the situation, I believe!

So, if you ask me, I cannot recommend highly enough Likya restaurant at Golders Green! The service is nice, the food is delicious and the proportions are huge. There are two set menus, the one with only cold starters and mixed salad and the meat platter, worth of £20.00, while the other one with hot starters and coffee and dessert, along with everything else comes to £22.00. I think it’s a good place to start exploring the eateries around Golders Green. If I could give it a 20/20, I’d do it in an instant!