Hey, you lovely people! I hope everything’s super fine. I had a lovely week, and even better weekend, so without further ado, here’s my list of things you can do in Bath. 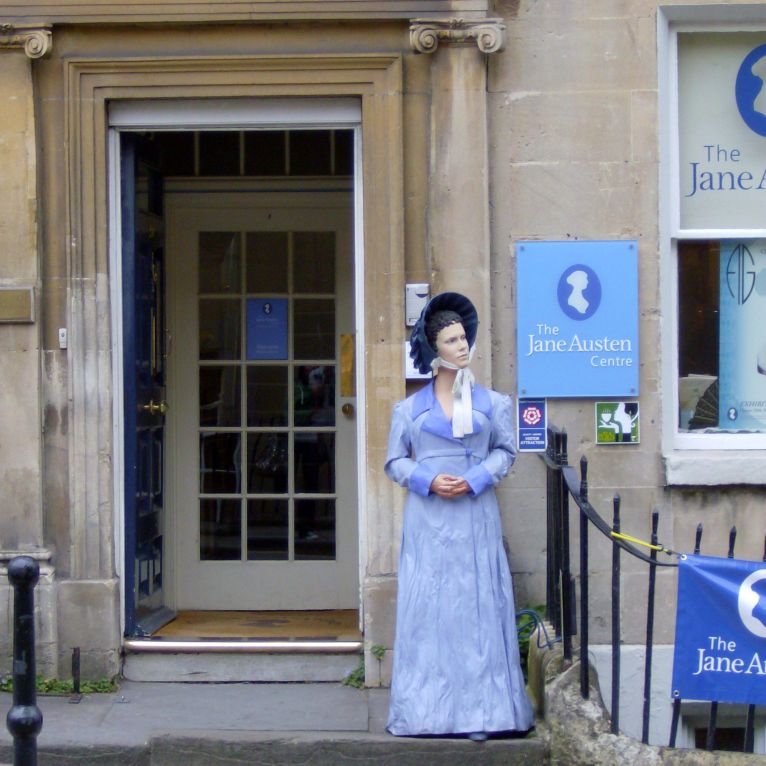 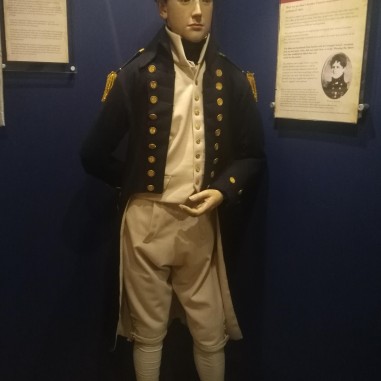 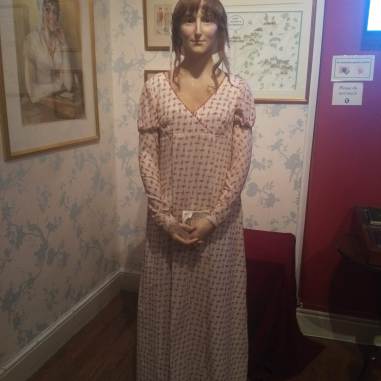 I think that for a Janeite, it is inconceivable to go to Bath and NOT visit the Jane Austen Centre. In there, the essence of who Jane Austen was is celebrated and you can learn all about her life and works before and after Bath. It is amazing if you think that such a small city left its mark on this important author, but how could it not? The buildings, the parks, the society, and yes the Roman Baths, all of them contributed to Bath’s popularity during the Regency period.

What I loved the most there was that the people working there were in period garb; I saw Mr. Willoughby and the Dashwood sisters. How cool is that?! You can even enjoy dressing up like Jane’s heroines, try biscuits and see Jane’s wax statue. A visit is worth it 100 times!

2. Assembly Rooms and the Fashion Museum 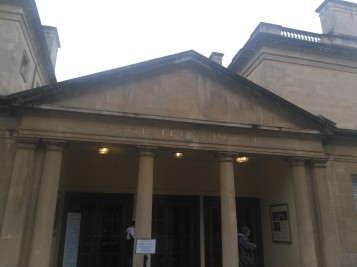 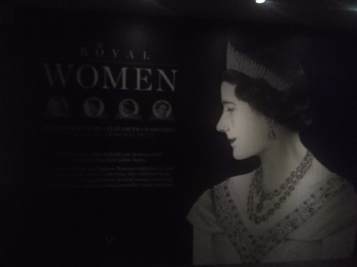 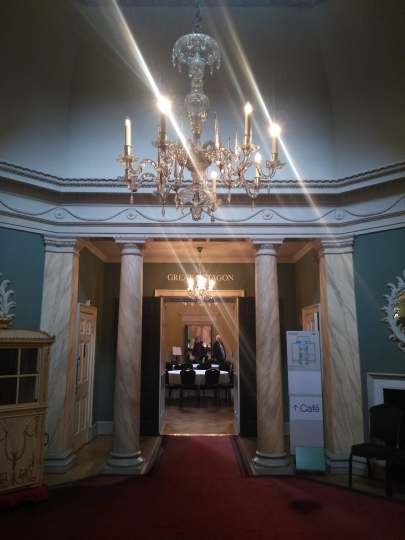 A short walk away from the Jane Austen Centre you can find the Assembly Rooms and in the basement is the Fashion Museum. Right now, they have their permanent collection about the history of fashion in 100 objects and a new exhibition about “Royal Women” that showcases dresses from Princess Alexandra to the Countess of Wessex, bringing the past with the present. It is a fabulous exhibition that you seriously need to visit!

The permanent collection is also impressive. An important object shown there is Mary Blathwayt’s parasol. She is an important figure of the suffrage movement in Bath, and in Britain in general. She provided shelter to other suffragettes in her home, so this parasol is indeed a part of Britain’s history. 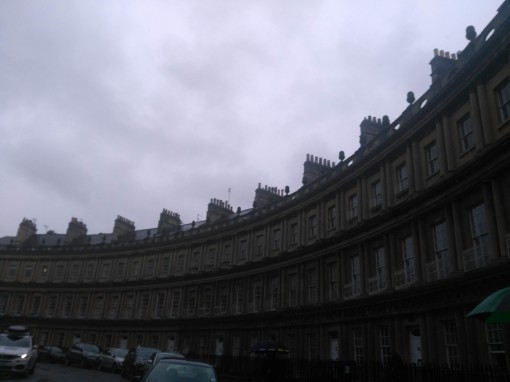 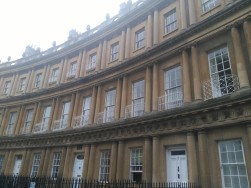 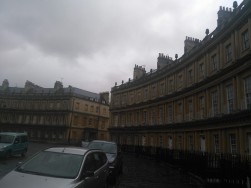 I think this is one of the most beautiful landmarks in Bath! It is very impressive, large and did I say beautiful? It was originally called the Royal Circus and it has three exits with a park inside it. It took 14 years to build, however its designer, John Wood the elder, wasn’t able to see it finished, as he died. Since 1770s, the Circus has seen several famous figures gracing its buildings, such as the painter Thomas Gainsborough or the Hollywood actor Nicholas Cage.

All the buildings are made from Bath Stone and feature ancient Greek and Roman details. It is the epitome of Georgian architecture and, in fact, it is considered as one of the most beautiful streets in the UK! Just imagine it without cars, that’s all I’m saying! 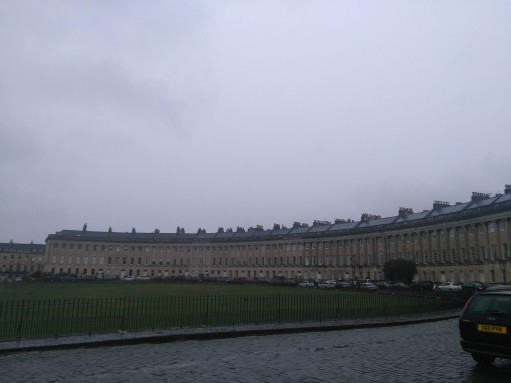 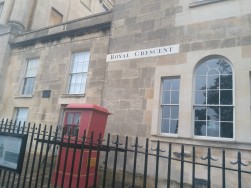 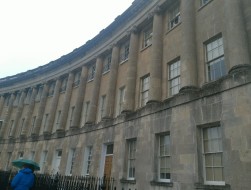 Within a few minutes from the Circus lies the Royal Crescent. It was designed by John Wood the younger and it was first known as “The Crescent”. It was only awarded its royal status in late 18th century, when the Duke of York stayed there. The central house operates now as the Royal Crescent Hotel, a five-star hotel in this prestigious location.

The Royal Crescent featured in BBC’s Persuasion with Rupert Penry-Jones and also in Keira Knightley’s The Duchess. Such a wonderful location, it would be even better to showcase, if it wasn’t raining the whole time I was in Bath!

5. Visit one of Bath’s churches 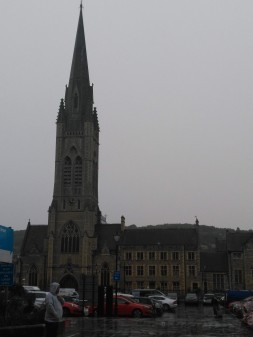 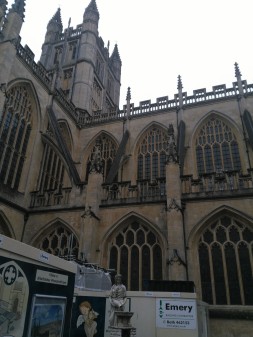 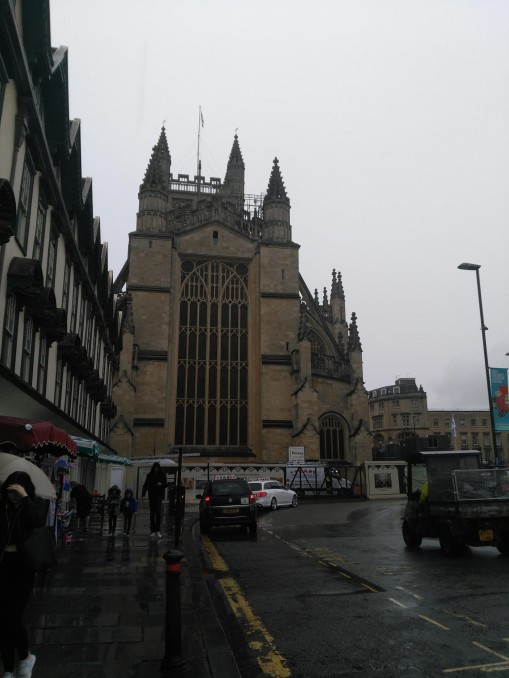 During my walk around Bath, I realised that Bath has a lot of churches around the city centre. Right after you exit the station and head towards Parade Gardens and Pulteney Bridge, you can see St. John the Evangelist Roman Catholic Church, which is a majestic building, built during the 1860s. Next to it, you can find Manvers Street Baptist Church.

But if there is two churches you need to visit while in Bath, it’s the Bath Abbey or St. Swithin Church, where Jane Austen’s parents were married, and where her father, Reverend George Austen was laid to rest. The Bath Abbey is imposing and so old! First founded in the 7th century, but was rebuilt in the 12th and 16th centuries. A visit is well worth it, to be sure! Unfortunately, I wasn’t able to pay homage to Reverend Austen’s burial in St. Swithin, but here’s to hoping for next time! 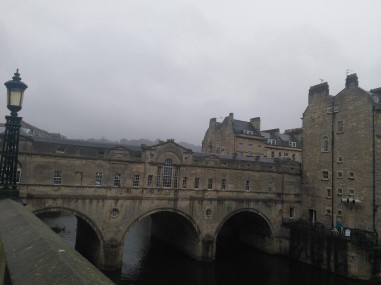 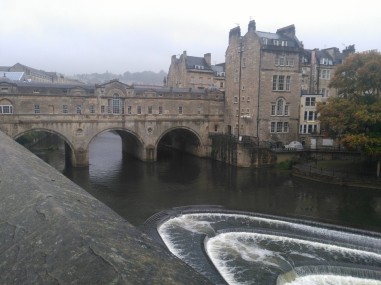 I could call the next thing on my list “From England to Italy”. This is a prime example of Palladian architecture that closely resembles the works of the Venetian architect, Palladio. With its three arches and look on river Avon, it is a graceful addition to Bath architecture. It has shops running its full span on both sides and, when standing next to it, it is the perfect location to take as many pictures as you want of the river below. The official Bath Tourism Site describes it as “one of the world’s most beautiful and romantic bridges” and I will definitely agree with that! 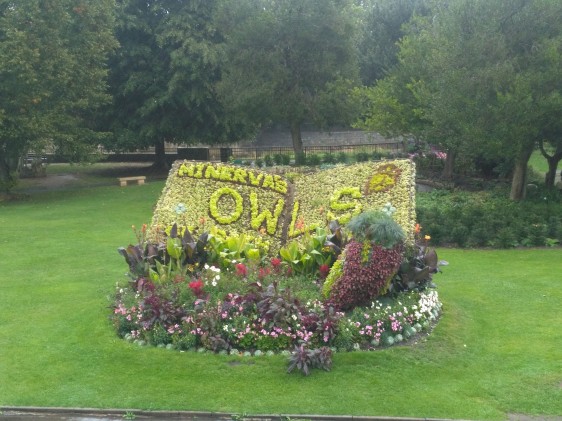 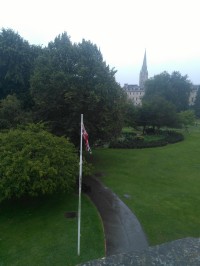 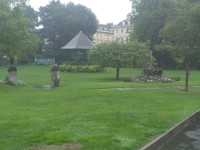 One more beautiful spot in Bath is the Parade Gardens. Within a short distance from Pulteney Bridge, you can find these gardens which are the jewel of Bath and Somerset, in general. The gardens offer stunning views of the Pulteney Bridge. Back in 2013, Bath was a Gold award winner in the RHS Britain in Bloom competition with the Parade Gardens, which is pretty cool, considering their size and history.

During the summer, there are outdoor concerts held at the bathstand, and for those interested you can have your wedding and reception there! It certainly gives a girl ideas, and I can’t wait to be back in summer to see the gardens from another perspective; that of full of sun and all the flowers in full bloom! If you think now they look amazing, can you imagine how they would look in summer? 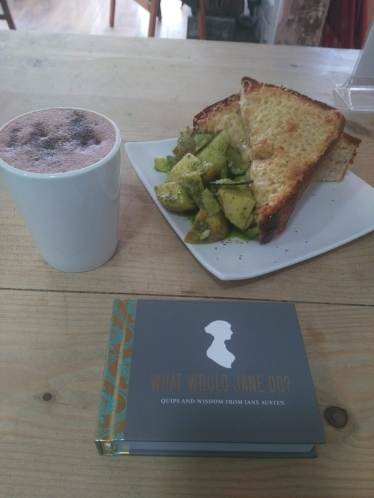 After all this walking around and exploring all that Bath has to offer, being famished is a certainty! I will now recommend a little place, Thoughtful Bakery. Artisanal, eco-friendly and with a great staff, this bakery is one of the best places to have your lunch. I went there, around 4 in the afternoon, to get a hot chocolate and something to eat, as I was wet, cold and extremely hungry. My chocolate was exactly how I like it, without any of the frills I hate in chain cafes! I also had a croque monsieur, which was toasted just right!

Apart from the food, right as I went in, I noticed that they ask from people to bring in vegetables and fruit from their gardens, so they save money and energy. Sourcing locally and other measures made me realise that it is a true jewel for the city of Bath and I am so glad that I stopped there, even without knowing! 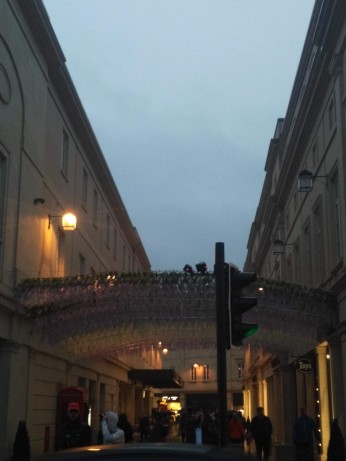 This is a shopper’s heaven! Topshop, H&M, Superdrag, Next, New Look and a fab Debenhams all are there! I spent over an hour at Debenhams, got plenty of inspiration for Christmas presents (it’s never too early to think about Christmas gifts!), and I could easily spent more time there, if it weren’t for a talk at Mission Theatre! If you want to visit though, I’d suggest going after your walk around the city centre, so as not to feel slowed down with your shopping bags!

10. Attend the Jane Austen Festival (and if you can, try the Ball!) 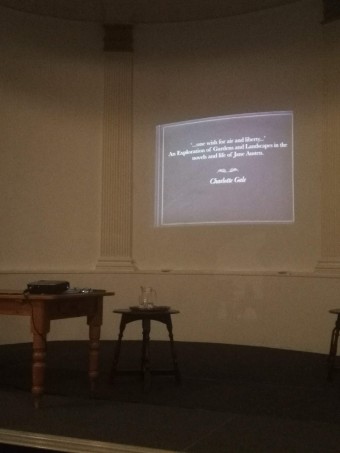 To be honest, this was the main reason I visited Bath this year! I first noticed it two years ago, but didn’t have the time to visit, to my shame. The festival lasts 10 days and is full of talks, walks, trips, the Regency Promenade and, finally, THE BALL! This year’s theme was Persuasion, and you could join the daily readings of Persuasion at Waterstones. What I really wanted to experience was the Regency Promenade, when over 500 people, dressed in Regency garb, walk from the Royal Crescent to Parade Gardens, and of course, the Regency masked ball, held at the Pump Room on last Friday, 21st September.

I did attend a talk about gardens and landscaping in the works and life of Jane Austen at Mission Theatre, which was quite fascinating! All in all, a great way to finish off my day in Bath.