Hello dearies! I hope everyone’s well and having a great time. I am not doing so well to be honest. By now, I believe that everyone knows about the Greek wildfires in Attica. I simply cannot imagine that in 2018 so many people have died, because of a wildfire in Attica. It’s unbelievable! Anyway, I will try to uplift everyone’s spirits, because life in the end goes on and we can only remember those who died.

If you’ve ever visited Greece, I’m sure you’ve tasted our famous street food, gyros or souvlaki for those who live in Southern Greece. Just to make everything clear, for us in Northern Greece, souvlaki is the skewer basically, while for everyone else souvlaki is what we call gyros. A point of contention really between the North and the South! Because we are Greeks, it’s in our nature to fight and fighting between ourselves for the food is natural! I’m kidding, but it’s very easy for a foreigner to get confused. I know I am sometimes.

(The ones above are from Yamas, the one below is from Thessaloniki) 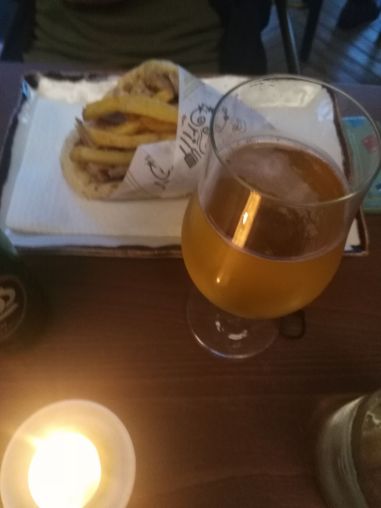 Apart from the name though, the quality (and quantity) of our street food is different. Thessaloniki for example is well-known about the quantity of our gyros. It’s literally huge and you have to be very hungry to finish it! Here in London, it’s very difficult to come across a Greek street food place that comes close to the standards I know from Thessaloniki. There was one place called GReat near Liverpool Street Station that had the best I tried, but since it closed down and reopened in Farringdon, to my shame, I haven’t visited it! There is also one place, recently opened, in Camden that I think has a lot of potential. It’s called Yamas (means “Cheers!”) and as I said, it recently opened. To be fair, I was a bit biased, even from before I went there, so this is the first time, since I started my blog, that I will not be as objective. The reason? The people behind it are also from Thessaloniki and I feel I need to support them! Sorry! 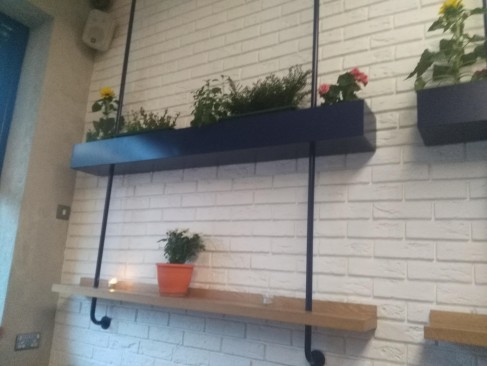 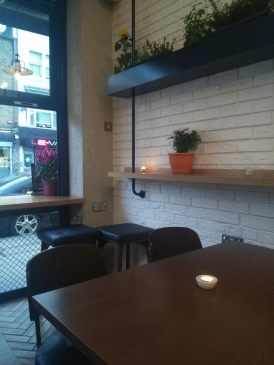 So, the night before, we went there and ordered a pork burger and a pork gyros wraps. We also had some feta cheese, a Greek bier and plenty of water (oh, the heat!). I can say that both wraps were close to the quantity I know from Thessaloniki, even if mine had a lot more tzatziki than I thought it needed! But the big surprise for me? It was feta cheese! I don’t know where they source it from, I don’t know how, and our server didn’t seem to know, but I do know that this feta cheese won me over! I am very particular about my feta. Since I was little (and eating feta like there’s no tomorrow!), I have been partial to hard cheeses and let me tell you, it’s hard to find hard feta cheese, even in Greece. God knows, I’ve been to plenty Greek restaurants in London, but no-one (and I mean no-one) offers hard feta cheese, apart from this little place in Camden! And for that, and that only, I will be visiting them again and again!

Apart from the wraps and grill portions, Yamas also offers traditional Greek food, like pastitsio (basically a pasta bake with mince meat and tomato sauce) and mousakas, which I would be willing to try sometime soon. I think that they try to be both a traditional restaurant and a fast food eatery; we will have to see if this experiment will last and if it’s going to be embraced by the multi-culturalism in London. If we exclude the food, the atmosphere was nice, with lots of flowers and Greek music playing. They were plenty of people eating, when we arrived, and, to my surprise, most of them were non-Greeks! I hope that they will do well, not only because they come from the same city as me, but because it’s always food good to have so many Greek restaurants around. But as I said before, they have my vote of confidence just for the feta cheese!

In the end we paid £19 for everything (my burger was £6.50 and the pork gyros was £6.00), which is middle range for me – not too expensive and not too cheap either. If you are willing to give it a go, it sits between Camden Town and Mornington Crescent stations, in Camden High Street. I wish them all the best for the future and I can honestly say that I will visit them soon!

PS: I recently became aware that I write a lot about food and, thus, make people hungry! So, should I put a warning (read my post after eating)?